150 Years of Memories
​In 1831 mention is made of the Clark and Eaton schoolhouses where traveling circuit riders conducted services to “proclaim the gospel” for the settlers in this area. Settlers met regularly in the Eaton School until 1866. These early meetings preceded a more formal congregation and church.

The cornerstone was laid June 20, 1872 by Rev. Seth Reed, the presiding elder. Philo Van Wagoner donated the laying of the wall for the foundation with stone drawn at a work bee May 9th and lime brought from Pontiac. The frame was raised on July 20th. The basement was dedicated on December 11th of the same year. Members were asked to sacrifice and the money was raised to complete the church the following summer at a cost of about $7,000. A Dr. Ives of New York dedicated the church on June 14th, 1874.

Church records tells us that after the completion of the church an excursion to Bay City raised the money for the purchase of the church bell in 1874. Church board members were requested to take a three-month stint of ringing the bell for all church services.

In 1872, during the pastorate of Rev. Cordon, work was begun on the structure that we still use today. It was built on two lots located on Flint and Lapeer streets that were purchased for the sum of $200. This site was later to become the location of the MC Railroad station and more recently, Auto Zone.

Music has been an important part of our church history. While no record gives a definite date for the first choir, we are led to believe it started with the early church. An entry in 1896 records mentions a “Singing School” held for ten nights with two classes for different age levels. Early choirs were led by volunteer directors who were dedicated persons who donated their time and talent as have many people who have sung in our choirs throughout the years. A pipe organ was purchased in 1905 and many benefits were held to pay for it. For many years this organ was powered by air, provided by an older boy whose duty it was to stay awake and keep pumping. It is a matter of record that there were a few times when he may have dozed off, much to the consternation of the organist and amusement of the congregation.

In 1897, during the summer assembly, our church attended Sunday School and morning services on Bellevue Island in a wooden tabernacle which seated 2,250 people.

One of the important committees appointed in 1906 was the Hitching Post one. In 1904 the question of lights was brought up and a committee appointed to get suitable lamps as members driving to church by horse and buggy had built sheds behind the church, and lights were needed.

In the Ladies Aid minutes of 1912, a dinner was served for the Republican Banquet at $.35 a plate with 200 guaranteed. In 1918 their regular money making dinners had increased from $.25 to $.50. The menu for a July dinner at this price included pressed meat, baked ham, escalloped potatoes, cabbage salad, buttered rolls, jelly, pickles, dark and light cake, iced tea, and coffee. They cleared a goodly amount - $55.46.

In 1915 the pastor and his wife were appointed to settle the “itching” problem by plowing up the poison ivy in the back of the church.

In his annual report of 1917, Reverend Osborn stated that the giving exceeded that of other years even with the extra demands of numerous canvassers for war causes and the attendance was greater also. Mention is made here that the church as held in the basement of the church during the winter because of the fuel shortage. Quoting the minister, “All things work together for good to those who love the Lord because it turned out that a goodly number of adults stayed on for Sunday School and became better acquainted in so doing.”

Through the efforts of Donalda Taylor Lessiter, the United Methodist Church of Lake Orion was officially designated a Michigan Historical Site in March, 1973.

In 1987 the chancel area in the sanctuary was expanded and the beautiful wood floor was refinished. The current office areas were added at that time.

1996 the Sunday School classrooms in the Old Testament Wing were renovated. Brighter classrooms and a larger hallway were completed. Rocks from the foundation were visible when the old floors were ripped up.

1997 was the 125th Anniversary of our church and a parade began at Auto Zone and travelled to the church as our celebration began. It was led by Pastor Tom Macaulay, wearing top hat and tails. Our little church float was put on a wagon and pulled by a horse!

And our story continues!!!
The following text is an excerpt from "A Brief History for Homecoming" by Marie Shoup and Helen Reynolds - It is as true today as it was when it was first written:
Over the years our community has been enriched by the ministry of our Methodist church as our members have participated in all areas of community. The school, the social, the business and the political life have all felt their influence.

"The View From the Top"

The UMM began as the Men's Club has been involved in several renovation projects at the church through the years. The men gather together for meals (sometimes as fundraisers) and Christian fellowship.

The UMW began as the Ladies Aid, later known as the Women's Society of Christian Service. Through the years their service and financial support towards the church has been ongoing. 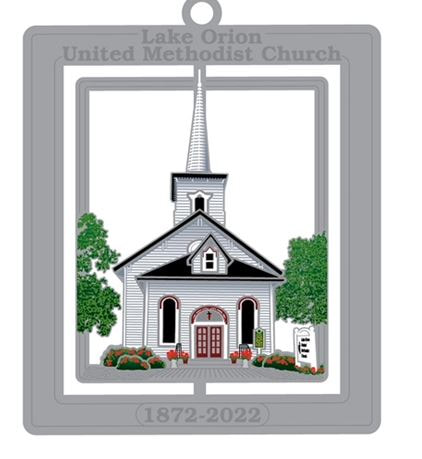 The 150th Anniversary Committee is offering for sale commemorative  ornaments of our church building as a memento of this anniversary year. You can see from the image that they are quite lovely and detailed, and are of fine quality. The Committee is selling them for $20 an ornament, but would certainly welcome more with proceeds going toward funding further anniversary events throughout the year. Ornaments can be purchased after worship. You can also send in your check (made out to LOUMC) to the office with "ornament" in the memo line and the Committee will set one aside for you and let you know when to pick it up.